Your boy is back and still building his vintage Masters of the Universe toy collection! Check out this latest unboxing video featuring a great selection of the classic 80s toyline!

I love baseball. I love cartoons. I love collecting. If you share any combination of those, it’s more than likely that you love “Homer At The Bat” from Season 3 of The Simpsons.

It’s great. As a baseball-obsessed 10 year-old during the height of Simpsons-mania, it felt as if this episode was written directly to appeal to me. To this day, it is one of my all-time favorite things in pop culture.

About a year ago, I decided I was going to put together a collection of the professional players that Mr. Burns brought in as ringers so he could manage the company softball team to a win over the team from Shelbyville.

Of course, tragedy struck all but Darryl Strawberry who did hit 9 home runs in the championship game, but when it came to collecting them in Starting Lineup form, the tragedy was solely stuck on me. I had assumed this would be a cheap and easy collection to amass and, for all intents and purposes it was, but there was just one figure that had a level of rarity and expensiveness: Mike Scioscia.

Mike Scioscia is probably best known nowadays as the longtime manager of the Anaheim Angels who he led to a World Series title in 2002, but back in 1992, when this episode aired and back in 1989, when his sole Starting Lineup figure was released, he was known as the longtime catcher for the Los Angeles Dodgers who backstopped a World Series champion team in 1988 and absolutely crushed 7 year-old me’s heart by hitting a backbreaking home run off Dwight Gooden in Game 4 of the NLCS that year that didn’t end the series, but effectively broke the spirit of my beloved Mets who severely underestimated the Dodgers after having had rolled over them during the regular season.

So when it came to collecting these figures: of course, it was Mike Scioscia.

You would find other players – I clearly remember my mom finding me Mark McGwire, Kirk Gibson and Andre Dawson, for example – but those guys were stars. You weren’t finding Dick Schofield, Alan Ashby and Gary Redus at the Kay-Bee Toys in Green Acres Mall in NY.

This simple sales ploy (I don’t mean that in a negative way and the logic behind the marketing and stocking makes plenty of sense, especially when you remember this was a world before the MLB package so you only ever saw your local team outside of a random game of the week and postseason) has led to the value of certain figures being significantly higher than the notable “stars”. Certain figures like Mike Scioscia.

The other eight figures came quickly and inexpensively. I don’t even think I paid more than $10 for a single one of them. But every time a 1989 Mike Scioscia Starting Lineup would pop up on eBay, the prices were far beyond anything I would have ever imagined paying.

A hundred and twenty dollars.

Why is this happening?!

I just wanted to buy some cheap toys and do a really fun unboxing video on my YouTube channel, but as a MOC (mint on card) collector in my heart of hearts, I can in no way now justify tearing open a Mike Scioscia figure when I’m going to pay this much for it.

But I had a plan. How many people out there could actually want this Mike Scioscia? How many hardest of hardcore Dodger fans or completist SLU collectors were out there rubbing their greedy, little hands together, dying to get their mitts on the former All Star catcher? So I waited. Certainly the price would drop at some point. It had to. And in the collecting game, patience is a virtue. The deals are out there, you just have to be willing to wait for them. I knew this would come to me.

So I waited. I tracked the listings on eBay. I did google searches from time to time. I checked Mercari and Facebook marketplace and LetGo. I put in the work because I knew that one day I would taste that sweet, sweet victory over the collecting hobby and have my prize trophy for the price I wanted to pay.

Except that never happened.

Time after time, listing after listing. Mike Scioscia never showed up for any less than $90 and, under no circumstance, could I possibly justify that. I’ve made bigger purchases, sure. I’ve spent more money on toys, absolutely. And it’s made me incredibly happy to do so…but Mike Scioscia? Man, I hate Mike Scioscia.

I tried to forget about it and just put finishing this collection to the side, one piece short of completion while focusing on other things, but it was in my saved listings always looking, watching, judging. It knew. Damn Mike Scioscia knew I was out there, lurking, peeking, never really giving up with the itch just growing stronger. This itch needed to be scratched so I could finally move on with my life.

It was too much to carry on my shoulders any longer. I finally admitted to myself that I had to have it, wallet be damned. Was $100 really going to break me? No, but that’s not the point. It’s the principle that I was positive this would be a ten, mayyyyyybe fifteen dollar figure when I decided to put this team together and the fact that I was now stuck paying a multiple of that just absolutely burned me. You got me, Mike Scioscia. You win. I tap.

So I turned the lights off in my apartment because I didn’t want to be seen doing what I was about to do. This wasn’t necessary since I live alone, but I was ashamed. I folded. Thirty-two years after the fact and I had become my biggest regret: I had folded like the 1988 Mets at the hands of Mike Scioscia. I did. I went on eBay and I found a listing for it. It was right there: Mike Scioscia, 1989 Starting Lineup. Mint on card. Just $90.

But I couldn’t do it. I just couldn’t allow myself to do this. So I did the next best thing: made a best offer of $75. It was still 7.5x more than I actually wanted to pay, but I told myself that $75 is way better than $90 and that I wouldn’t be losing here. I wouldn’t be winning either, but if I could just get the price down that little bit, I’d look at this standoff with Mike Scioscia as a draw and not the lopsided victory he would have had again over me.

It worked. The buyer accepted my $75 offer and I wrestled Mike Scioscia to a hard-fought draw. My collection of 1992’s City Champion Springfield Nuclear Power Plant team of ringers was now complete.

You almost got me again, Mike Scioscia. But you didn’t break my heart again, oh no, this time you merely just slightly bruised my ego and that’s OK. Because I only slightly gave in to my principles and we’re all forced to compromise our beliefs at some point to get what we want.

Is it over? Hardly. There will be another. Another collection to complete. Another figure to buy. Mike Scioscias under different names. But for today, for this battle, I didn’t completely lose. And sometimes, just “not losing” is true victory.

The complete lineup, one through nine

That’s right! Our double main man Joe is this week’s guest on WrassleRap a podcast that meshes pro wrestling with hip hop where he talks about action figure collecting, adult encounters and, obviously, his wrestling career. Check it out on Spotify or Apple Podcasts or simply press play here!

Check out this new unboxing video where Joe discusses the 1992 trade of David Cone from the New York Mets to the Toronto Blue Jays while unboxing Kenner Starting Lineup figures!

Super7 has been killing the game with their reaction figures featuring all sorts of known properties and now they’ve expanded into MLB Mascots! Check out this video of me opening up the first three: Mr. Met, Phillie Phanatic and Crazy Crab! Take a watch, drop a like and subscribe to the channel to see all future videos!

Hey everyone! I recently got a full Wave 1 of the Savage World ThunderCats figures made by Funko and decided to try my hand at an unboxing video! It’s my first one so be polite, but check it out, subscribe to the channel for future videos and share with your friends if you’re into it. Thanks for watching!

Holy shit, 79 episodes?! We’re really doing it! Give a listen as the greatest smorgasboard in podcasting presents a packed episode chock full of toys, video games, theme park, movies and sports! We talk about the things we find interesting so if you like us, you’ll like this. Just search Car JoeMeZ Podcast on any app or platform and hit that subscribe button to get new weekly goodness delivered to your device instantly!

As discussed in Ep. 18 “Freddy or Jason”, I’m a huge fan of “The Golden Girls”. I used to watch it with my grandma and even have the collector’s set DVDs. I still love it and think the humor holds up pretty well.

So it was of no surprise that when Funko announced a series of POP Vinyl figures based on the show, I was all over it. 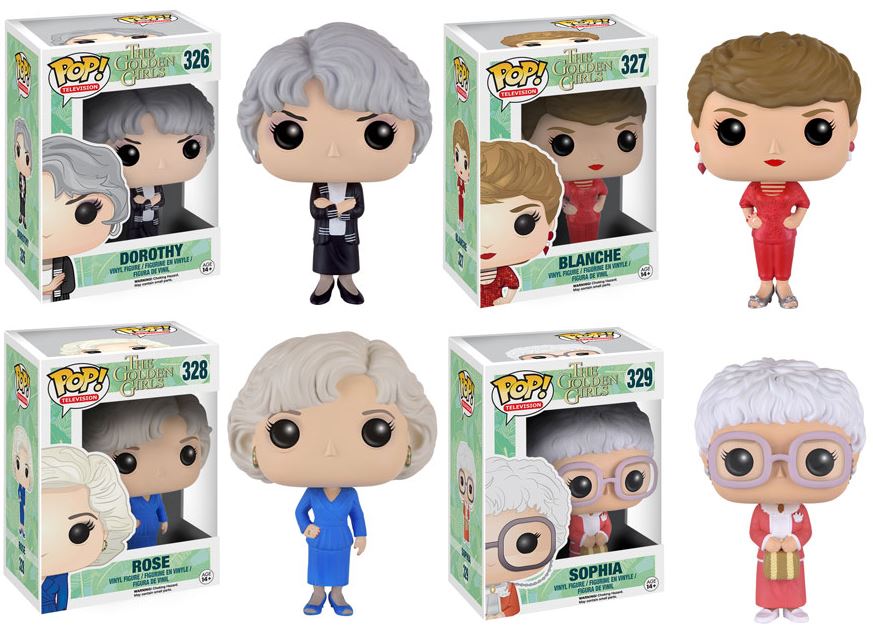 I pre-ordered these beauties immediately and even kept a space clear in my apartment for their impending arrival. They’re amazing.

A little bit after that announcement, there came another one containing the news of a special New York Comic Con exclusive of our beloved ladies done in the fashion of ReAction figures.

Supposedly, this pack became the hot toy of Comic Con and none of the people I knew who were attending were able to grab it for me. This has now gone on to be an eBay nightmare with some closing in on $200. I love the Golden Girls and would love to have figures in the same scale as the Super7 Masters of the Universe, but c’mon now. That shit is banana town.

So yeah, this is what I was getting so upset about. I have no idea why all these people decided to jump on the Golden Girl bandwagon that I’ve been driving for decades. Hey, fugazi fans: stop ruining shit for the rest of us!

At least this sweet t-shirt was waiting in my mailbox when I got home:

Based on the wonderfulness that is this clip, obvi:

Just had to get this all out. Thanks for listening.

On this week’s episode, we spoke about some of the top toys from 1986 including the WWF Superstars line which was made by LJN. These figures were made of thick rubber and were heavy AF. They definitely caused a shit ton of damage when used as a projectile. Although they lacked points of articulation, they were awesomely detailed for the time and featured a great depth of characters from the time. Still sought after by collectors, the line has seen its value jump significantly over the past few years as more people search for a dwindling supply.

Here’s a commercial promoting one of the earlier series of the line.