Our double main man, Anthony joins the fold with an unboxing video from his December Retro Game Treasure delivery! Check out his first video with us and make sure to subscribe, like and comment!

Welcome back to another edition of the Daily Cartoon on Car JoeMez! Remember to check out the weekly show, The Car JoeMez Podcast, on iTunes, Soundcloud, Stitcher or wherever you get your podcasts. Listen to a couple of episodes, subscribe and leave a review because that stuff all helps and I’d appreciate it.

As for today’s cartoon, we’ll be watching an episode of James Bond, Jr. As the title implies, this show was basically a type of Flintstones Kids but with the nephews and kids of characters from the Bond universe.

The show had one 65 episode season produced for syndication that aired between 1991-1992. Personally, I remember it as a show that I’d watch while I was eating breakfast before my mom shuttled me off to school in the mornings. I don’t remember it really ever catching fire, but it may have been more popular than I remember because it had a toy line…

…and a video game! 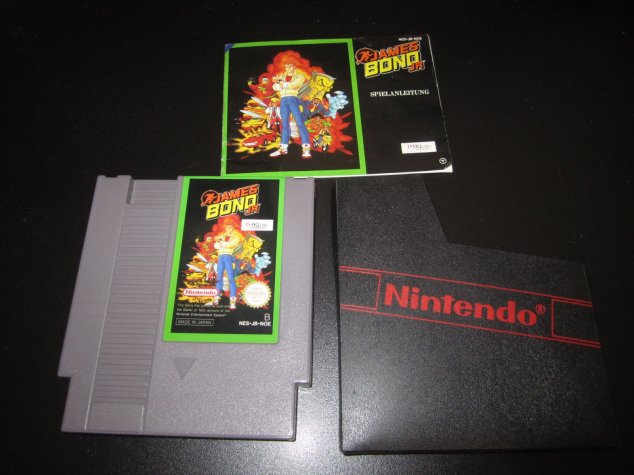 I can’t say I ever had any of that stuff or even played the game, but I remember the show being OK enough for some early morning entertainment.

The basic premise that James Bond, Jr. (nephew of the actual James Bond) attends a prestigious school with classmates IQ (grandson of Q) and Gordo Leiter (son of Felix Leiter). The team up to battle the villainous group known as SCUM (Saboteurs and Criminals United in Mayhem).

If I were the bad guys, I’d totally use the abbreviation too. Someone just put way too much thought into that name. I wonder if there’s an episode where they just sit around brainstorming names. That’d fill 22 minutes, I’m sure.

So that’s the background on JBJ, so – with that said – let’s watch a cartoon.

First off, the intro to this show is pretty good. The song is really catchy and it’s the main thing I remember about this show 25 years after the fact. You’ll probably like it too.

We open at Heathrow Airport where James Bond, Jr. is returning to England after a trip abroad. As he’s coming through customs, he recognizes Skullcap, a SCUM agent causing a ruckus on another of the lines. JBJ goes after Skullcap who evades him and runs out of the airport and on the ramp where a plane is being loaded for takeoff. Skullcap hijacks the plane and Bond, Jr. requisitions a staircar to chase him.

Apparently, he’s taken the most powerful staircar ever built because he’s able to not only keep up with the airplane, but get in front of it right before Skullcap is able to takeoff. Bond boards the plane and – after a brief fight – grabs an envelope that Skullcap is trying to protect before hitting the ejector seat and leaving Skullcap to die in a fiery crash that we don’t see, but I’ll just assume happens.

Bond gets admonished by the headmaster of his academy for doing stupid, dangerous shit on school grounds and shit like that is why they’re cancelling the school trip to Paris. Supposedly, terrorists have smuggled a nuclear warhead into Paris and the school needs to protect their students. I guess we have our mystery for the day.

While James is getting a workout in, IQ, Gordo and other friends Tracy and Phoebe are watching him and discussing the nuclear weapon thing. Turns out that the envelope JBJ grabbed from Skullcap contained plans for such a nuclear weapon and Bond is fired up about wanting to go to Paris and foil this plot. As soon as he says that, Mr. Mitchell, the school’s athletic director comes in to have a casual chat with the group. He knows all of JBJ’s off-campus activities and gives him a tip as to when would be a good time to leave school grounds to head to Paris.

The crew take a hovercraft to Paris since JBJ is temporarily banned from the airport and are met by an undercover SCUM operative who clues in the big bads that Bond is on board. All of a sudden, Skullcap show up in a helicopter very undead despite his absolutely tragic and unseen demise in an awful, horrible , violent plane crash that I assume happened at the beginning of the episode and begins shooting at the hovercraft. Luckily, they turn the tables and force Skullcap into another crash landing that I’m sure will have finally killed him for good this time.

James goes on a dinner-date with a girl from the hovercraft ride who I thought was a SCUM agent, but turns out is the daughter of a French policeman. Their date is interrupted by Dr. Derange (one of the top guys in SCUM) and Skullcap, who is still not fucking dead, but JBJ and his lady friend, Marci take care of business and go searching for the warhead together.

Marci informs James that in addition to the streets of Paris, she also knows the sewers so the two head out through the underground toward the Eiffel Tower since James is certain that’s where they’ll find the warhead. They come upon the underground lair of Dr. Derange and find what they were looking for. Unfortunately, James and Marci are captured by Skullcap (still not dead) and the two are chained to the missile which is being geared up to be shot to Moscow.

James uses his trusty laser-watch to cut the chains and free him and Marci. He then rips out the navigation wiring from the side of the warhead which sends it into space instead of Moscow. James and Marci return to the lair looking to apprehend Dr. Derange, but he’s already gone and has sworn revenge for another day.

I actually really enjoyed this! Got your typical cartoon cheesiness, but in a fun way and I really liked Dr. Derange. Apparently he’s one of the most active villains in this series and I would definitely watch more to see what else he’s got going on.

I killed off Skullcap three times without him actually dying once. My apologies to the Skullcap family.

The Bond crew is OK, but – in this episode, at least –  they didn’t get overexposed and I was thankful for that. Gordo, IQ and Tracy serve their purposes well enough, but the Phoebe girl is Tracy’s nerd BFF who has this over-spoken crush on JBJ and I’m sure it gets very annoying very easily.

If you want to check this out, there is a DVD set available, but YouTube isn’t that great. It’s got some episodes, but in very meh quality and broken up into parts which gets annoying. I may check out some more episodes if I get some time because I did have fun with it so feel free to do the same.