So October may not start until tomorrow, but we’ll jump into the Halloween season today! For the whole month, I’ll be tracking down Halloween episodes or specials of some of your favorite shows and be recapping them right here because everybody loves themes!

Starting us off for this month-long celebration is an episode from Season 1 of Bobby’s World! Back when Howie Mandel still had hair and was in between being under  your bed and opening briefcases he was the creative genius behind Bobby Generic and the world around him.

This show actually ran for seven seasons in the 90s and was hella popular for the depictions of a toddler’s fantasy world.

So why are we starting with this? Honestly: I was pressed for time and this popped up pretty quickly on YouTube. I liked this show as a kid and voila! Here we are. So let’s jump into it! Halloween!

We open with a live-action Howie Mandel hanging out with animated Bobby in the kitchen which was super cool in 1990 since you didn’t see a lot of it even post-Who Framed Roger Rabbit? Bobby certainly seemed to like it as he always got the last laugh on poor Howie similar to Baby always outwitting Earl Sinclair on Dinosaurs. 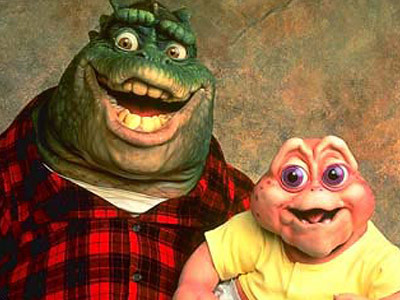 Either way, Bobby is hyped about dressing as Captain Squash for Halloween. And who can blame him?

Bobby’s mom, Martha, is decorating for Halloween. She’s got those aerosol cans of cobwebs that she’s spraying all over ensuring that every member of the family will one day have cancer.

She talks with a Minnesota-like accent which I only realize now because as a kid, I just thought she was Irish. That’s not even a lie or something I’m making up to try to be funny. I literally just paused this episode because the first time she speaks I said to myself, “I could have sworn she was Irish.”

So this is was 9 year-old me thought Irish people sounded like.

Bobby’s brother Derek comes down the stairs dressed like a pimp and holding Bobby’s hand saying that he’s dressed as a dork. Only thing is Bobby’s just in his normal clothes so I don’t se…ohhhhh. He’s just a dork. Got it. Martha’s not happy about that and tells Derek to go put Bobby in a proper costume. Jeez, Mom, too busy spraying cancer all over the house to dress your kid for Halloween? Pssssssssh.

Bobby’s sister, Kelly, who talks like a Valley Girl, but dresses like a rocker grrrrrrl knows of the perfect costume for her little brother: a princess. OK, Mom needs to get involved in her kids’ lives at least a little bit right now. You can’t be sending the boy out as a princess. Maybe today you can, but not in 1990. That shit didn’t fly. Start being a mother, Martha.

And she does: making Bobby put on the costume she bought him at fucking Costco or wherever. He’s a pumpkin which…let’s be real here: it’s not a great a costume, OK? Like, it’s not. But it’s perfectly acceptable to dress a little kid as a pumpkin because little kids have no rights or say and it’s all about being able to look cute in pictures that way your mom can have them printed into wallet-sized photos (remember those fucking things?) and send them off to her sisters as if they give a shit.

This is before Facebook so the gratification of having cute kids was a slow-burning game as opposed to just getting a bunch of likes from your fifth grade lab partner and your third cousin: neither of whom you ever speak to, but still feel the need to be friends with just because.

Well, that was a pretty good rant for 4 minutes of episode time. SMH.

Bobby is complaining that he wanted to be Captain Squash for Halloween and Martha’s like, “Bobby, shut the fuck up and be cute.” In walks Bobby’s dad, Howard who’s dressed as Humpty Dumpty. Him and Martha are going to a costume party, but Bobby has to stay home and give out candy with Uncle Ted because he’s too little to go out. OK, solid parenting. Credit to Martha.

Uncle Ted is the cool uncle and he shows up dressed as Elvis, completely with awful pompadour and electric guitar. Since Bobby can’t go out, Uncle Ted decides to make a haunted house inside to give his nephew the full effect of the holiday.

The scam is that Bobby and Uncle Ted make kids pay $1 and a piece of candy to walk through their cardboard haunted house. It carny as fuck as I love that Uncle Ted is teaching this child to work the marks. Ted tells Bobby it’s a hit and that he can be a tycoon. Bobby immediately launches into a fantasy of having his own resort island and casino. It’s brilliant.

Uncle Ted decides to build an even bigger maze and has an unlimited supply of empty cardboard boxes to build with. You’d think he had an eBay store or something, but this is years before eBay. For now, though, the spook house is a hit and people are lining the block to walk through and see what the big hullabaloo is. The big scare in the spook house? “The Witch’s Chamber” which is just peeking into Kelly’s bedroom to see her with a facial mud mask on that sends all the children into hysterics.

The local news shows up to cover that neighborhood’s biggest spook house and Bobby starts having a fantasy about getting his own late night show. He’s not far off. Haunted houses are a great way to get discovered.

Bobby and Uncle Ted completely freeze up during the TV interview and completely destroy any chance of Bobby getting his own late night talk show.

Eventually, Howard and Martha come home and Martha completely loses her shit at the mess Bobby and Ted have left all around and inside their house. Bam-dum tssssssss. Happy Halloween!

Not for nothing, but this show is still good. We’re talking about an almost 30 year-old episode here and this was still creative, fun and enjoyable. It flew by and got me remembering how my brother and I used to watch this on Saturday mornings as kids.

Man, Saturday mornings used to be the shit. You kids now have access to cartoons all the live-long day, but us? Nahhhh, fam. Hell, my family didn’t even get cable until I was in high school and even then it was because I had to bribe my mom by saying I’d get straight A’s on my report card to do so. She thought it was a safe bet until I got those motherfucking A’s. Once that beautiful, insulated wire was installed I went back to getting my C’s.

But yeah, this show was great and the littlest phrases being able to trigger Bobby into disappearing into fantasyland is perfect and spot-on. If you don’t think so, you’ll have to believe me. I used to be a small child and do the same thing. You’d hear a phrase or cliche that you didn’t quite know the meaning to and all of a sudden your train of thought drifts. At one point, Kelly tells Bobby that “Mom’s gonna blow her top” and Bobby imagines Martha’s head actually popping off her shoulders like a balloon. It’s simple, but it plays well and is completely effective.

So what if the kid is running a haunted house scheme with his uncle? He’s still a kid and the show constantly reminds you of that fact in the best ways possible. I really scored with opening the Halloween theme with this because I really did have fun with it and now I can’t wait to do the next one.

One thought on “Daily Cartoon: Bobby’s World, S01E08: “Night of the Living Pumpkin””